In the heart of the town and protected from possible enemy incursions, this church, elevated to parish dignity in 1749, was built around 1615 by the Genoese architect Arturo Fieschi and dedicated to St. Martin of Tours. The bell tower is from a later period, as it was built in the second half of the eighteenth century. It has a Baroque façade, restored in 2006, which highlights the religious images frescoed for the first time by A. Laura in 1928, representing Christ the Redeemer and the Archangel St. Michael. The interior has a central altar, dedicated to St. Martin, and two side altars, respectively dedicated to Our Lady of the Rosary and the Sacred Heart. On the sides of the entrance there is a baptismal font and a confessional. In a niche behind the main altar there is a wooden statue of the Madonna with Child (16th century) whose chronological interpretation is problematic: the style refers to Burgundian art of the fifteenth century, but the statue certainly dates back to a later period. On the walls there are seventeenth-century works (including two paintings, respectively depicting St. Sebastian with Saint Petronilla and St. Martin with St. Bernard) and the statues of St. Martin and St. Sebastian. At the entrance to the town, this small stone church built in the 14th century and dedicated to St. Bernard of Clairvaux stands out. The churchyard is characterized by a decorated pavement and some flower beds. Here some important ceremonies are usually held both of a religious and political nature: every August 20, which is the Solemnity of St. Bernard and the National Day of Seborga, a solemn procession takes place in the presence of the city authorities, the Princess and the citizens. In the churchyard Prince Marcello and Princess Nina were also crowned. Inside there are various paintings, one of which, from the 16th century, depicts St. Bernard with St. Roch, Saint Lucy and St. Maurus.

Palace of the Monks and Seborgan Mint

This building, purchased by the monks from a Seborgan in 1607 and immediately called “Palazzo”, is located in the San Martino Square and surrounds the churchyard with its sequence of round arches. Used by the monks as a home during their visits to Seborga, it is now a private home. On the ground floor the Palace has a large hall with a large slate fireplace, on whose horizontal beam there is still a slab with the coat of arms of the Cardinal of Vendôme and the lilies of France, with the French phrase “Sebourge sois assurée que je quitte sans regret”, which is believed to have been sculpted by the monks themselves around 1729, as they were happy to have sold the Principality to the Savoy; in the early twentieth century this room was also used as a ballroom. In the lower part there is a room where the luigini were coined from 1666 to 1687, and a large oven. The first floor had the kitchens, while the second had four rooms, used as the residence of the monks. After the sale to the Savoy, the Palace became the seat of the Town Hall and the nursery and elementary schools until 1981, when they were moved to a new building at the corner of Via della Zecca and Via Matteotti. The façade, previously in masonry, had a stucco with the Savoy coat of arms, the inscription “MUNICIPIO”, the date 1896 and a plaque with the names of some Seborgans who died in 1884 during the cholera epidemic; following a subsequent restoration, the façade was rebuilt in exposed stone, the plaque was removed and the Savoyard coat of arms was – actually rather clumsily – modified to adapt it to the coat of arms of Seborga granted by the King of Sardinia around 1760 (the red of the shield was painted blue and the tricolor flags were repainted in white and blue). 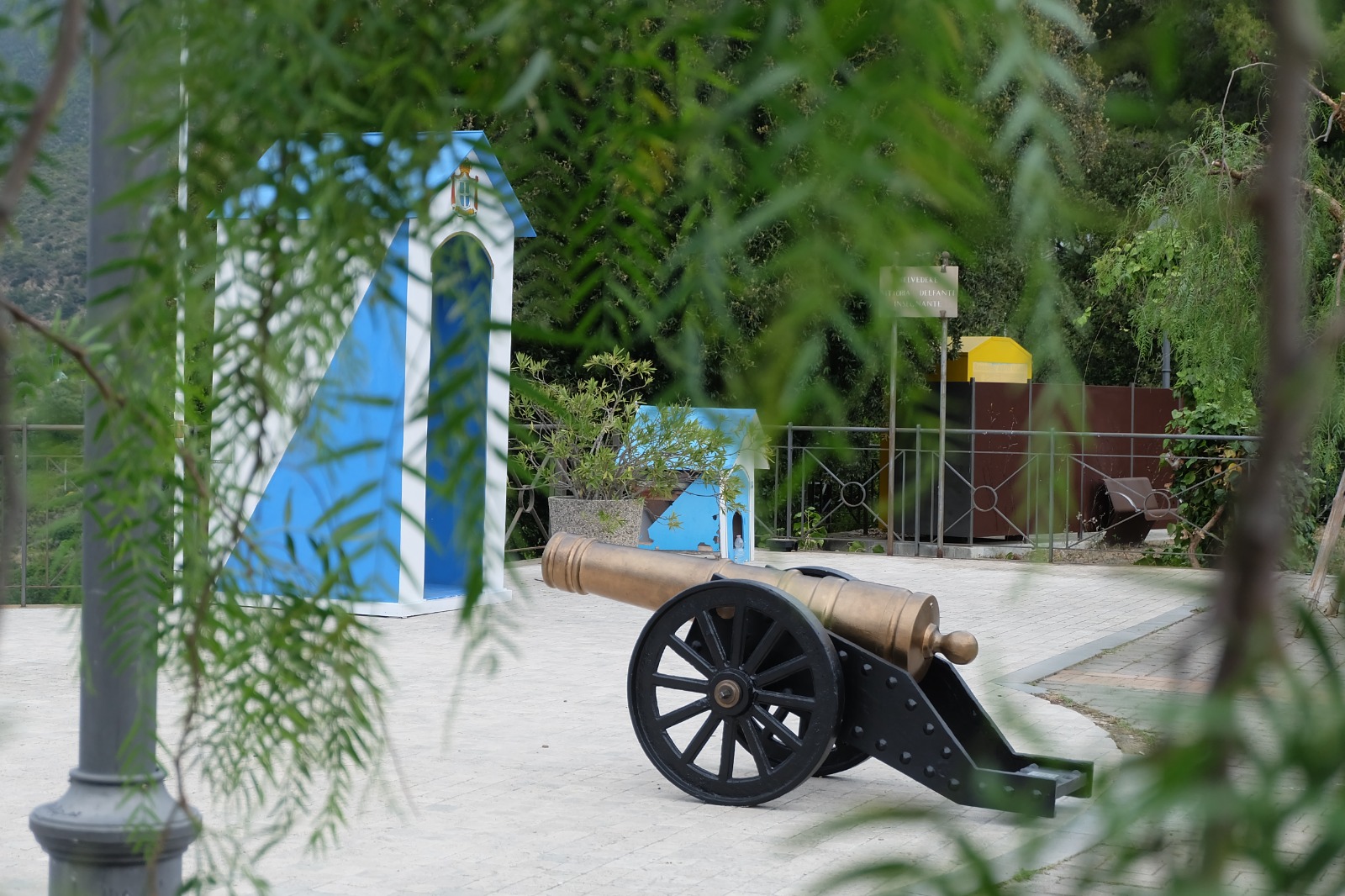 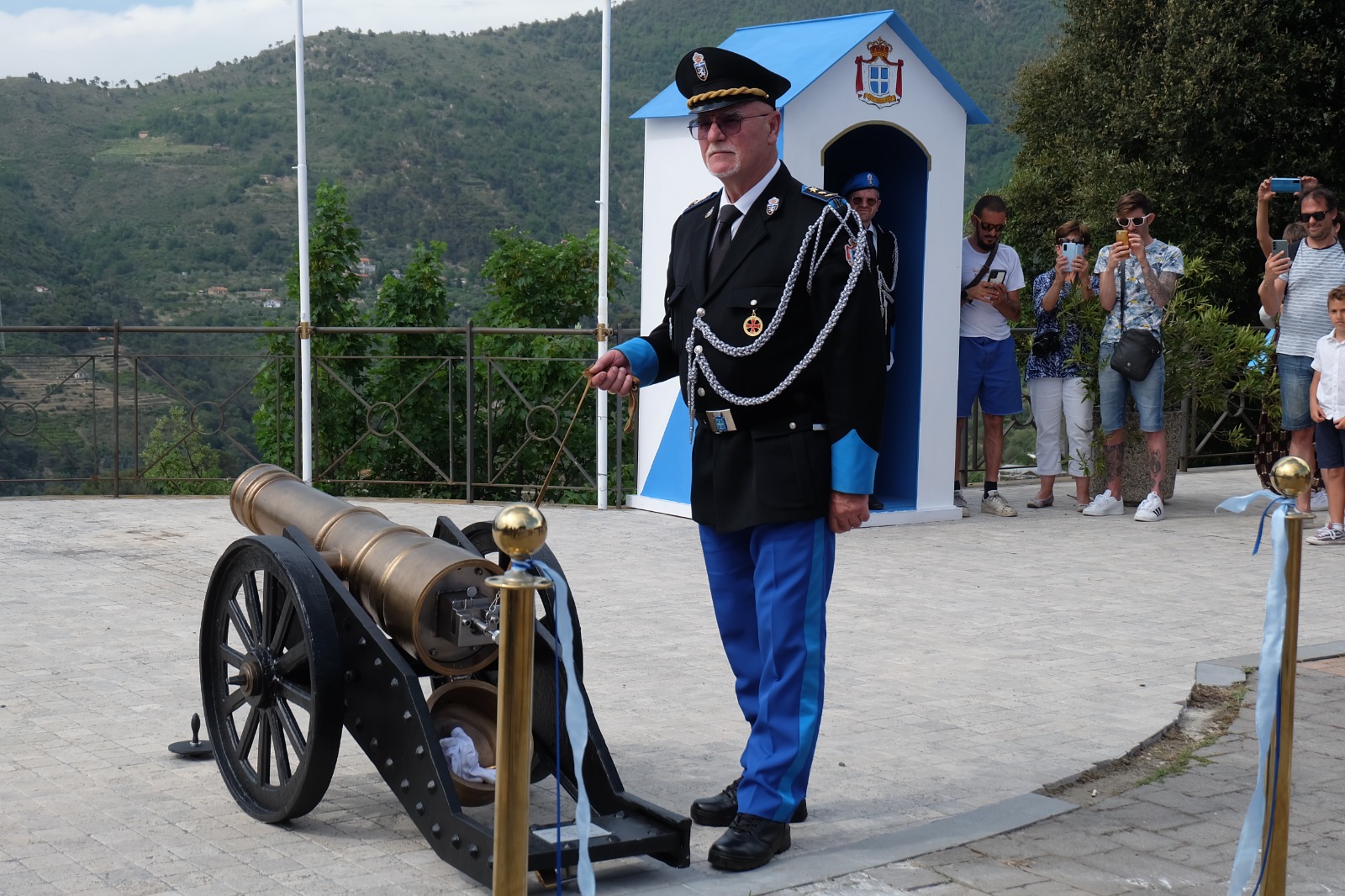 At the beginning of the Martiri Patrioti Square that precedes the entrance to the historic center, there is the Belvedere which offers an enchanting view of the valleys below, as far as the French Riviera and the Principality of Monaco. At the Belvedere there are two white-blue sentry boxes with the flags of the Principality of Seborga and a characteristic cannon donated to the town by Michael and Sabine von Thielmann in May 2022. Here, every first Sunday of the month, around noon, the Guards are in charge of firing a salute shot, a ceremony that takes place in the presence of some Crown Councilors and – when possible, according to her agenda – by HSH the Princess.

The gates of the city

The urban core of Seborga was originally equipped with four access gates. Only the hinges of the ancient gate to the north of the town remain, while the Porta San Martino, that of San Sebastiano and the Porta del Sole (shown in the photo) are clearly identifiable. A dark and damp room, with some straw on the floor, a rustic wooden bench and a chain fixed to the walls constituted the ancient Prison. In fact, the Prince-Abbot of Seborga also had the “ius gladiis et sanguinis”, that is, the right to impose the death penalty on those guilty of serious crimes. They were imprisoned in this room together with the other people condemned to lesser sentences. Over the centuries, about 200 individuals were imprisoned in the prison; none of them was sentenced to death.

Cave of Our Lady (“a Crota da nostra Scignura”)

When HSH Prince Giorgio I was already ill with amyotrophic lateral sclerosis, he wanted to make a homage to the Madonna, to whom he was particularly devoted, by having a statue placed in a small restored stone cell, where even today it is possible to pray in a simple but full of Christian spirituality environment. Monument to Umberto I, King of Italy

In 1920 Queen Margherita of Savoy, who was staying in Bordighera, inaugurated this monument dedicated to her husband, Umberto I, which is located in a green area at the entrance to the town. Monument to the Alpini troops of Seborga

Next to the Oratory of San Bernardo there is a 1971 Monument dedicated to the Alpini of Seborga who fell during the Russian Campaign. A monument was erected to the Mayor of Seborga Bernardo Leone in 1954, in memory of the construction of the Bordighera / Seborga roadway (12 km) that he had strongly wanted. Monument to the Fallen of the World Wars