The luigino in the seventeenth century

Seborga issued its own currency for the first time in 1666. The monks of Lérins, in fact, looking for alternative sources of income to agricultural rents, which for some years had been rather scarce, decided to exercise one of the rights that belonged to the Sovereign Prince and, on Christmas Eve, Prince-Abbot Cesare Barcillon thus contracted out the management of a new Seborga mint for five years to Bernardino Bareste of Mougins, for a fee of 740 lire per year; the contract to Bareste was then extended until 1679. In the mint, located in the Palace of the Monks in Seborga, the so-called luigini (whose name was inspired by the currency in France at that time, the louis) began to be coined.
The coins bore the bust of St. Benedict on the obverse (but some argue that it was St. Honoratus instead) and on the reverse the coat of arms still used today by the Lérins Abbey, surmounted by a princely crown. On the contract signed in 1666 it was reported that the trustee had the obligation to report on the coins the weapon of the Lérins Abbey and the inscriptions relating to the princely rank of the Prince-Abbot, while he was recognized for the rest ample faculty to imprint “anything else lawful he liked”.
The luigini were immediately frowned upon by the King of Sardinia and the King of France, who probably wanted to prevent the circulation on their territory of coins that escaped their control and their taxes. Initially, however, they had great success in the East, where they were popular and sought after for their practicality characteristics; this prompted the monks to increase their production, while at the same time reducing their quantity of silver; over time, therefore, also in the East the Seborgan luigini ended up with decay.
In 1679 Bareste was succeeded by Silvan Condaz and in 1686 Condaz was succeeded by the coiner Jean D’Abric. D’Abric, however, was accused of manufacturing false coins and therefore, after a protest from the King of France, the minting of the coins was suspended and never resumed. The Mint of the Principality of Seborga therefore remained formally active from December 1666 to October 1687, although no luigini produced after 1671 are known. The material used for minting the coins was then sold in 1719 by the Podestà of Seborga Giuseppe Antonio Biancheri to the Republic of Genoa, in partial repayment of a previous debt that the monks had contracted with Genoa in 1584.
To this day, only twelve luigini have survived, which are classified as “very rare” and are of great numismatic interest. Four are part of the numismatic collection of King Victor Emmanuel III (these are the coins that the lawyer Lea sent to the King of Sardinia Victor Amadeus II in 1729, when he made an inspection in Seborga during the negotiations for the sale of the Principality) , one is in the Turin State Archives, two in the Imperial Museum in Vienna, one in the Hôtel de Ville in Marseille, one in the Hôtel de Ville in Lyon and three are in private possession. The luigini of Prince Giorgio I

A new impulse to numismatic activity – and, this time, also philatelic – is given by Prince Giorgio I, who in 1995, with the Decree 1995.02.28, re-establishes the ancient right never abrogated to mint Seborga’s own coins. The SPL identification code is assigned to the luigino. The exchange rate is fixed in relation to the US dollar: 1 SPL = 6 USD (by clicking here you can access an online converter that allows you to calculate the exchange rate of the luigino with other currencies); according to some experts this would make the luigino the monetary unit with the highest value in the world.
On 12 March 1995, the first issue of 2,500 prototypes of numismatic luigini dated 1994 was made.
On 23 April of the same year, however, the circulating series of coins dated 1995 was issued, consisting of 5 and 15 cents, half luigino and 1 luigino. Voters in the Referendum of 23 April 1995 for the approval of the General Statutes were also given a 1994 numismatic luigino.
On 14 June 1995, on the occasion of Prince Giorgio I’s birthday, a 7-and-a-half luigini collectible coin was issued. This coin, made of 999 silver, had a weight of 31.1 g, equivalent to one ounce.
On 17 August 1997, a new 1996 2 luigini coin was issued both circulating and in 999 silver, celebrating the Proclamation of Independence of 20 August 1996. The coin also won a prize for the effigy of the Prince Giorgio I, made with particular realism and in a frontal position, a rather rare choice in the numismatic field.
Also in 1997, a 10-cent coin was issued both circulating and in 999 silver, in honor of St. Bernard of Clairvaux, founder of the Poor Militia of Christ.
The coining of the luigini was carried out on behalf of the Principality of Seborga by the Mint of Verrès (Aosta). The luigini of Prince Marcello I

As Prince Marcello I ascended the throne, other issues of luigini were made.
In May 2012, a new version of the 1 luigino coin was issued, replacing the effigy of Prince Giorgio I with that of Prince Marcello I.
Two months later, on the occasion of the National Day of the Principality (20 August 2012), a new commemorative coin of 2 luigini was issued, on the reverse of which there are the two superimposed faces of Princes Giorgio I and Marcello I; the original series consists of only 200 coins.
Finally, in 2013, a new commemorative coin of 2.50 luigini was made celebrating the Church of St. Bernard; the coin was minted both in 999 silver and in metal. The luigini of Princess Nina 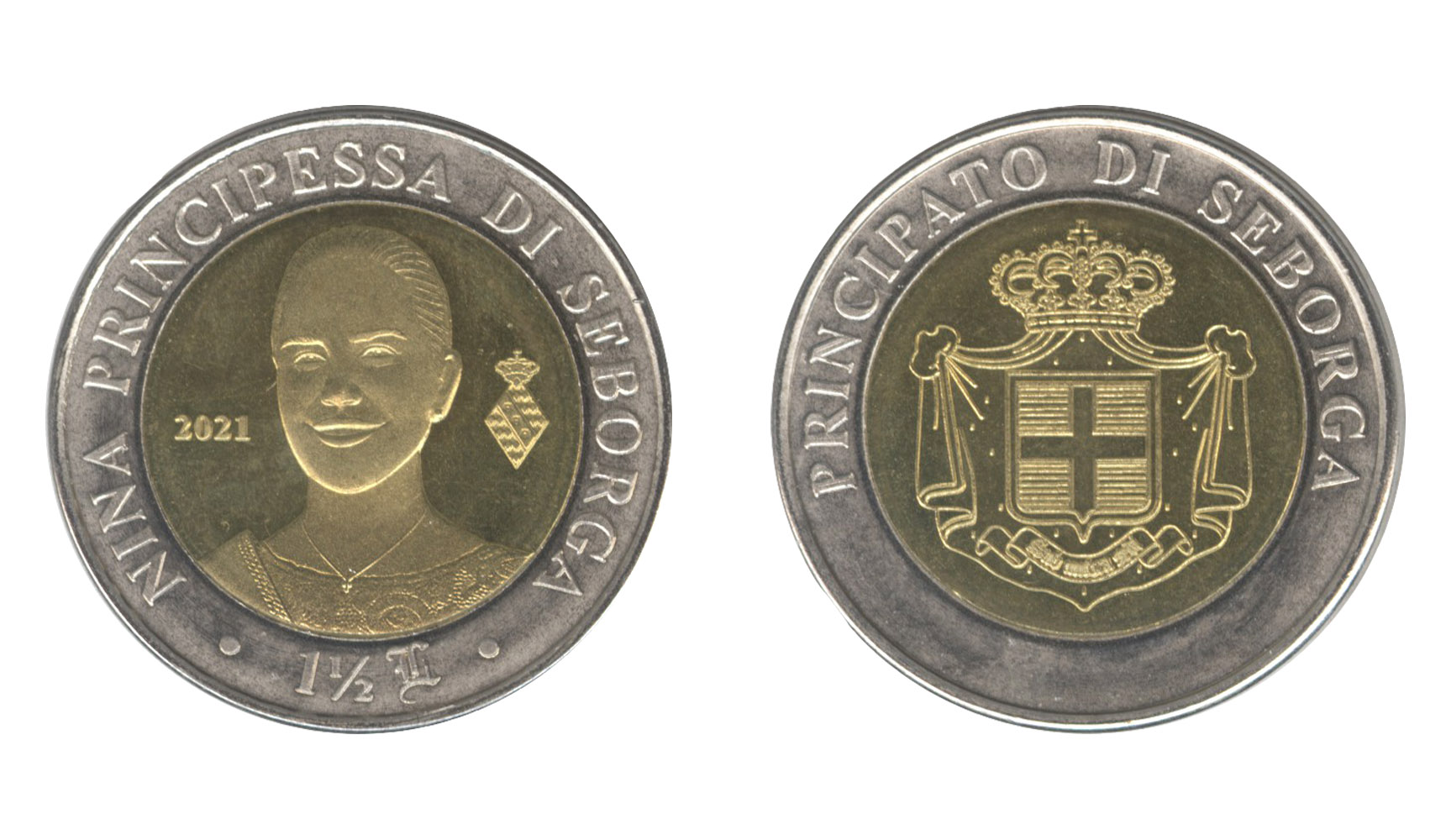